Want To Learn Ways To Reduce Cooling Costs Without Replacing Your Central A/C?

Click For Part 1 Of Our 4 Part Article: Als Plumbing And A/C 75 Ways To Reduce Cooling Costs 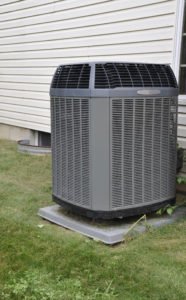 (Note: The compressor is shown in the left front corner of the diagram of the outdoor unit.)

DFW Weather During One Entire Year

During summer — Dallas’ weather is considered: “sub-tropical”.   The air will be hot & humid most of the time.  During May to September — the weather is often be described as “oppressive.”

In DFW — once it gets hot for summer, it stays hot.  But, during spring and fall (as occasionally during winter) — a one-speed A/C may have too much cooling capacity.  With a single-speed A/C, this may cause the home to cool off quite fast — then the A/C turns off.   If it’s humid — the A/C may not run long enough to remove enough humidity.  This may cause the house to feel: “cold and clammy”.    But that doesn’t mean a single-speed A/C is a bad choice in DFW.   It only means that indoor-comfort may not be optimized during cooler weather. 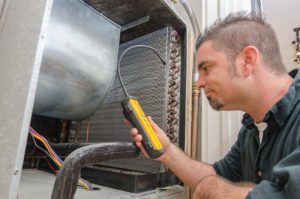 Shown: (right side of image) Indoor Cooling Coil (evaporator) Inside a Furnace

A single-speed (called: “single-stage”) has one A/C compressor speed.  The unit is either on or off.  Single-Speed A/C are the most common because they are the lowest priced.   Because the compressor runs at one speed — it always cools at its maximum capacity.

During cooler outdoor temperatures — there may be times when the A/C output exceeds the home’s cooling-demand.   That doesn’t mean the A/C is oversized.   The A/C is sized to provide comfort at the hottest time of the year.  If it’s running most (or all) of the time when it’s hot outside — it’s likely correctly size for the home.

When the A/C’s cooling capacity exceeds the home’s cooling-demand — a single-speed A/C will cycle on & off frequently.  This may cause the humidity to be higher than you prefer.   You can reduce humidity by setting the thermostat to a cooler setting for a temporary period of time.   But, that may trade one problem for another — if the home feels too cold.

These problems are solved with a variable-speed A/C.  It adjusts its compressor’s speed to match the home’s cooling-demand.  As cooling demand rises or falls — the A/C compressor speeds up or slows down, so your home is the temperature you want.  The furnace blower-fan also speeds & slows to match the A/C compressor speed — and runs longer (at a lower speed) with a variable-speed A/C.  Because the furnace blower-fan moves air at a slower speed — it will do a better job of removing humidity.  The slower air moves through the indoor cooling-coil — the more humidity is removed.

A Two speed (called: “two-stage”) has two A/C compressor speeds.   On cooler days — their lower speed is 60-70% of the high speed.  On hotter days — the A/C switches to the higher speed.  Similar to variable-speed, two-stage A/C will run for longer periods of time when they are running at their lower speed.  This minimizing starts & stops, and more frequent need to recool attic ductwork.  These factors lead to better energy efficiency and comfort.

It takes more electricity when the A/C turns on and off (running at full speed) — versus running longer (at a slower speed).  After a central A/C turns on — it takes up to 10 minutes before it reaches maximum energy-efficiency.  An A/C running for longer periods of time (at a lower speed) usea less electricity than one that is cycling on & off.

Longer cooling cycles provide improved humidity removal.  As compared to a single-stage A/C, a two-speed & Variable-Speed A/C removes more humidity by running at lower speeds during cooler weather.  The slower that air is pulled through the indoor cooling-coil — the more humidity will be removed.  This is an important feature in locations where humidity levels are high — like DFW.

During summer, attic temperatures in DFW can reach up to 160 degrees.   This requires the A/C to run for several minutes (to cool the ductwork) — before cooled air reaches the home’s interior.   Longer cooling cycles reduce the need to frequently recool the ductwork.

Variable-speed A/C compressor speeds adjust to match the home’s current cooling demand.   These A/C’s include an additional device called an Inverter.  The inverter’s job is to slow down or speed up the A/C compressor’s speed to match changes in cooling-demand.  Variable-Speed A/C run at many different speeds — to match their cooling-output to the home’s current cooling-demand.  Variable speed A/C continually adjusts its cooling-output — by slowing or speeding the compressor (and furnace blower-fan) speed as needed.

You can’t use a single-speed furnace with a multi-speed A/C.  With a mismatched HVAC System — the benefit of the multi-speed A/C unit is negated by a furnace that can’t accommodate it.   For instance, in cooler outdoor temps the A/C would slow down — and the temperature of the air coming from the ducts would be so warm that it would seem the HVAC System isn’t working.

** SEER stands for: Seasonal Energy Efficiency Rating.  It advises of the efficiency-rating for a specific A/C system.

Platinum 20 A/C has the highest efficiency.  **