This Article Discusses Areas That Are Currently, Or May Soon, Require Newly-Built Residential Construction Be All Electric.

Some History Why There Are Many All-Electric, Mid-Century Homes In The U.S.

At the end of World War II, most existing homes were heated with coal or heating-oil.  Many central heating systems were steam radiators and their  boilers was about 60% efficient (40% of the heat went up the chimney flue).  Another common central heating furnace was called an “octopus furnace”.   This furnace did not have a blower motor.  Instead it relied on rising hot air and sinking cold air to move air through the furnace.  The octopus furnace was about 50% efficient (50% of its heat went up the chimney flue).  Also, exiting homes with coal were stigmatized as being dirty and requiring frequent attention in the form of adding coal or removing ashes.

Starting in the late 1940’s, suburbia became the new place to live.  After World War II ended (1945), a tremendous number of new homes were needed for returning GI’s and their families.    In 1947, Levitt Homes broke ground on America’s first suburb.  It was a community located in Long Island, New York, and became known as Levittown”.   These were the first mass-production, tract homes built in America.    Within a few years, the Levitt’s had built a community of 17,400 two-bedroom & one-bath homes.  The homes were available to veterans who bought them with G.I. Mortgages (known today as VA Mortgage).   These Levittown homes had heating-oil boilers and in-floor, hot water, radiant heating. 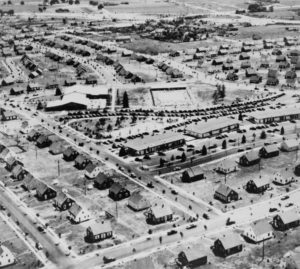 As mid-century America boomed, new power plants were built to meet rising demand.   Additionally, home air conditioning was becoming common with more than 1 million window air conditioners sold in 1953 alone.  During the baby-boomer years (1946–1964) the rapid pace of new homes built, plus adding air conditioning to new and existing homes created a lot of electricity demand during summer.  This forced electric utility companies to build additional power plants to meet summertime electricity demand.  Many of those power plants were shut down during late fall and winter. 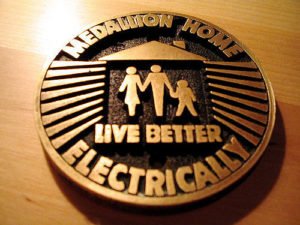 If You Are A Baby-Boomer Or Older, You May Remember The “Live Better Electrically” Marketing Campaign

In 1956, the “Live Better Electrically” (LBE) Campaign was launched.  It was for new, all-electric homes built during the mid 1950’s to early 1970’s.  During that time, electric utility companies rushed to meet the increased demand for electricity in post-WWII America.  The LBE campaign was aimed at creating year-round electricity demand.  LBE encouraged homeowners to consume more electricity using a variety of electricity-powered products.

LBE was a multi-million dollar, nationwide campaign (co-sponsored by the General Electric (GE) and Westinghouse corporations) to promote electric; heat, water heating, & appliances.  It touted the benefits of electric heat as being clean and maintenance free.  LBE was supported nationwide by 900 electricity generating utilities and 180 electric home-products manufacturers.  The LBE campaign was launched through a variety of media outlets.  Entire all-electric neighborhoods were built, with Gold Medallion Homes as the standard.  The medallions (shown above) were affixed near the doorbell, and branded that mid-century home as all-electric.

With the disadvantages of coal and heating-oil, owning an all-electric home allured new many new home buyers.  There were entire communities with all-electric homes built all over the United States.  While a gas furnace would have provided the same convenience, the LBE’s campaign focused on electric sources in order to drive demand for electricity year round.

To earn a LBE Gold Medallion emblem a house had to be all-electric.  The house had electric; heat, water heating, cooking appliances, and perhaps an electric clothes dryer.   To meet the high electricity demand of these homes, 150-ampere electric service was required ( homes with other fuel for heating and water heating typically had 60-Amp electric service.  Also required was specified number of outlets and switches per linear foot of wall space, and built-in lighting throughout the house.  This was uncommon in new homes that used other heating fuels.  A home that met LBE standards could be have a 3-inch brass plaque with the “Live Better Electrically” logo (shown above).

Why Are Some Areas Starting To Mandate All-Electric Homes?

As of December, 2019 — 50+ California cities and counties have adopted, or are considering, regulations for newly-built homes must be all-electric .   Local government leaders in California are responding to; global-warming and other climate concerns, increasing air pollution, explosion risks associated with natural gas in homes.  In July, 2019 — Berkeley, CA voted unanimously to adopt a “first in the nation” ordinance that prohibited gas in all new construction.

Additional cites in other areas of the U.S. are considering all-electric regulations.   These include; Minneapolis, MN; Seattle,WA; and Cambridge, MA.

Starting in 2020, California law requires all newly-built homes must include Solar Panels. *2    The California Energy Commission has also given new home builders the option of supplying solar power from an solar-power facility in lieu of solar panels on each home.

Is Natural Gas A Safe Fuel For The Environment?

Efficient Burning Of Natural Gas Has A Small Impact On The Earth.

But — Natural Gas Leaks Into The Air That Occur During Mining & Distribution Adds Significantly To Global-Warming.

A 2018 study published in the journal Science found that U.S. oil and gas operations are leaking +60% more methane into the air than the U.S. Environmental Protection Agency (EPA) had previously calculated: about 13 million tons more each year.

Natural / methane gas IS a clean energy source when burned properly.  It produces less CO2 (a green house gas) than any other fossil fuel (see chart below) for the same amount of heat generated.