This article is about future “Second-Generation”  Evaporative Coolers (also known as Swamp Coolers).  They are called DeVap Coolers because they dehumidify incoming air before the air passes through the Evaporative Cooler.   This product is being worked on (as a prototype) because a  second-generation DeVap Cooler will work in high humidity locations like DFW.  It will operate (in DFW) for about 1/2 the cost of central a/c).

Conventional Evaporative / Swamp Coolers only work in areas with low humidity.  They are ideal for only desert and semi-arid climates.  In order for a swamp cooler to work, the incoming air must have quite low humidity.  If incoming air has high humidity, the evaporation process cannot occur, and the air coming of of the cooler will not be sufficiently cooled.  At 85% relative humidity, a swamp cooler does not cool at all.

Al’s also provides full service plumbing maintenance, repairs and replacements for every plumbing component in your home.  Al’s sells and installs Rheem Professional Series gas & electric water heaters, and tankless water heaters.  Al’s is near your home in Plano, Garland, and Richardson.  We service all homes in southern Denton and Collin Counties with no additional travel charges.

DeVap Cooler That Works In Humid Climates Like DFW

NOTE:  DeVap Coolers Are Currently In Prototype.  They Are Not Yet Available For Purchase At The Time This Article Was Written (December 2018). 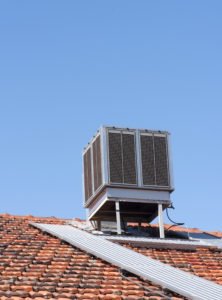 Relative Humidity is the air’s ability to hold humidity at the current temperature.  As temperature rises, relative humidity percentage lowers — even though the amount of humidity hasn’t changed.  This is why Weather Reports use “Dew Point”.  Dew Point is humidity measurement that doesn’t change with air temperature.

*   The Mayo Clinic recommends a humidity level between 30-50% inside the home.

See A Photo Of The Prototype DeVaporative Cooler Below

Roughly the western third of the U.S. has a climate dry enough for traditional evaporative coolers.

These specific areas have a suitable climate for Evaporative Coolers:

Swamp Coolers will only work in Texas roughly west of the eastern border of the panhandle.    This is where Texas’ climate changes from Humid Sub-Tropical to Semiarid.  Even there Swamp Coolers won’t work great because the air is still too humid.

Las Vegas Has The Right Humidity Level For Evaporative Coolers.

So Why Are Evaporative Coolers Not Used A Lot There?

** Note: Divide the BTU’s by the SEER to determine how many watts a central a/c uses.

As Compared To Conventional A/C: 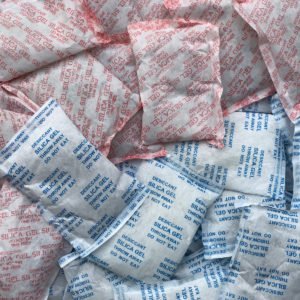 You often see Silica Packets inside packaging of products. Silica is a desiccant.  If a packet is included, it’s there to eliminate any moisture that could affect the product.

The premise of Second Generation – “DeVap Coolers” is adding equipment to dehumidify the air before it enters the Evaporative Cooler.  The dehumidifying process is provided by a Liquid Dessicant (in this case, highly concentrated salt-water).  The drier the air entering the evaporative cooler is, the lower temperature it can cool to, and without excess humidity in the output air.  DeVap coolers can perform well in ares with high humidity.

Natural Gas is used to dry the Dessicant (salt water) after it has removed the humidity from the incoming air.   It can also be provided with solar energy.  For this reason, the amount of electricity consumed by a DeVap Cooler is up to 90% less than conventional a/c.   Natural gas prices in DFW are quite reasonable, creating substantially lower operating-costs for a DeVap Cooler as compared to conventional air conditioning.

Evaporative Cooling Is Very Energy-Efficient Because It Uses A Natural Cooling Process (evaporation).

It’s the same as when we sweat.  Our skin becomes cooler because the sweat is evaporating.

STEPS OF HOW A DeVAP COOLER WORKS

Dehumidification:   The Salt-Water Desiccants’ Ability To Remove Humidity (dry out) from the Incoming Air

Cooling: An Evaporative Cooler Cools The Dehumidified Incoming Air (from the dehumidifier).

The Combination (of Dehumidifier + Evaporative / Swamp Cooler)  Allows A DeVap Cooler To Work In Humid Areas (like DFW).

Sea-salt Climate Engineering may become a way to slow global warming.  This is how it works: Specially designed, unmanned boats spray the ocean’s salt-water into the air. The water evaporates & leaves behind sea-salt particles.  The sea-salt particles lift into the clouds, increasing the clouds’ reflecting-ability.  ****

While yet in prototype, sea-salt engineering may be used in oceans to keep the earth’s top-of-atmosphere “Radiative-Forcing” at the year 2020 level..

At present, DeVap Coolers are still in prototype.   In time, they will become available, and will create large operating-costs savings when compared to conventional air conditioning.  Actual savings is determined by the humidity level in the air where the cooler is located.

DeVap Cooling uses a conventional Evaporative Cooler (as known as a swamp cooler).  They cool the air by passing air through a water filled mesh.  As the air passes through the mesh, evaporating water cools the air — just like evaporating sweat cools our skin.   Conventional swamp coolers are only useful in areas with low humidity such as the western 1/3 of the U.S.

DeVap Coolers include a dehumidifier.  The air is dehumidified first — then passed through the evaporative cooler.  The lower the humidity of the incoming air, the better an Evaporative Cooler can cool.  A DeVap Cooler is able to perform well in climates with high humidity.  The higher the humidity, the harder a DeVap system must work to dehumidify the incoming air.  While high humidity increases operating costs,  DeVap coolers still operate much cheaper than conventional a/c.   As presented in this article, in DFW a DeVap Cooler will cool for a around 1/2 the cost of regular a/c.

Al’s also provides full service plumbing maintenance, repairs and replacements for every plumbing component in your home.  Al’s sells and installs Rheem Professional Series gas & electric water heaters, and tankless water heaters.  Al’s is near your home in Allen, Frisco, and McKinney.  We service all homes in southern Denton and Collin Counties with no additional travel charges.