A Federal Pacific Electrical Panel Is Dangerous — Does Your DFW Home Have One?

Home » Blog » A Federal Pacific Electrical Panel Is Dangerous — Does Your DFW Home Have One?

A Federal Pacific Electrical Panel Is Dangerous — Does Your DFW Home Have One?

Call Al’s today to discuss any concerns or problems you have with your HVAC System or Plumbing.  We will arrange an appointment at your convenience and offer 24/7 Emergency Servic

A Federal Pacific Electrical Panel Is A Fire Waiting To Happen!

PLEASE NOTE: Al’s Plumbing, Heating & A/C does not have an Electric-Service Division.  Al’s does not perform electrical work beyond of installing HVAC Systems and electric water heaters.

This Article is written as a Public Service, warning homeowners of the dangers if their home has a Federal Pacific (FP) Electrical Service-Panel (also commonly known as a circuit-breaker box).

The History of Federal Pacific Electrical Panels in DFW Homes

During the 1950s–1980s a Federal Pacific Electrical Panel was one of the most popular brands in the United States. They were installed in millions of homes.  “If your house was built during this period, it probably has a Federal Pacific Electrical Panel.  About 90% of houses built during that time have them,”  said Bob Charvoz, chief home inspector for the American Association of Professional Inspectors in Plano.

Fox & Jacobs was acquired by Centex Homes, which was acquired by Pulte Homes.  There is no liability on the part of these 3 Home Builders.  They installed Federal Pacific Panels which had both the Underwriters Lab’s (UL) Seal Of Approval and met Building Codes at the time of their installation.  Federal Pacific is out of business. The homeowner must pay all charges related to the replacement of these dangerous panels (this article’s author paid to replace 3).

Federal Pacific was found guilty of fraud in a a Class-Action Lawsuit in New Jersey in 2005.  This stemmed from documentation and evidence that Federal Pacific (FP) lied about the reliability of their circuit breakers tripping in order to obtain Underwriter Laboratories’ Seal.  Federal Pacific is no longer in business.

This LINK takes you to a YouTube video showing a Federal Pacific Circuit Breaker subject to Double The Electrical Load it was designed to trip at. The breaker does not trip, even as smoke rises from it:

How To Identify A Federal Pacific Electrical Service Panel 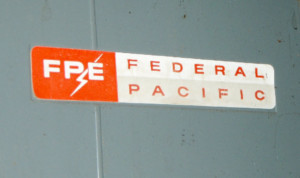 The general requirements for installation of circuit breakers are detailed in the National Electrical Code (“NEC”).  The NEC code is adopted by most State and local jurisdictions.

On the basis of available test results, FPE Stab-Lok® circuit breakers do not meet the functional requirements of TODAY’S NEC, State and local codes, or Underwriter’s Labs’ UL489. **

Some may state that the FPE Stab-Lok® breakers are in conformance with applicable code(s) because they were at the time of their installation.  This is because they were UL “listed and labeled” (a requirement to meet Building Codes at that time).    Electrical distributors, electricians and electrical inspectors did nothing wrong by installing and approving these panels. FPE’s fraudulent practices of falsifying circuit breaker performance-results & applying UL labels to these panels mislead the Electrical Trade that these panels were safe. Federal Pacific also misled Underwriter’s Labs. *

Many Home Owners Insurance Companies will not insure a home with a Federal Pacific Panel, as they have been responsible for too many electrical fires. If you are buying a home which has one, you can request the Seller replace the panel as a term of your purchase offer.  You can use the justification of the statement shown above in bold. **  The Seller has the option to decline or reject your offer with this requirement.  Sellers are not obligated by law to replace a Federal Pacific Electrical-Service Panel (because they met Electrical Code at the time of their installation).

What To Do If You Have A Federal Pacific Panel

The only safe course of action is to have a Federal Pacific Electrical Service Panel replaced by a Licensed Electrician who pulls a Permit.  After installation, your city will inspect the panel to ensure it’s installed correctly.  The cost for this will be substantial, but the cost of not doing it can be deadly.

Over the years, many tests have determined that some Federal Pacific circuit breakers do not trip when overloaded.  Regardless of how much care you take to not overload circuits, a short-circuit can occur at any time.  A short circuit cannot be predicted or stopped in advance.

Definition of a Short Circuit:

Short circuits occur when a portion of a circuit becomes improperly connected to another portion of the circuit.  The most common type of short circuit is when a part of the circuit (typically an electrical wire) comes in contact with a grounded object (completing the connection and allowing electricity to flow where it shouldn’t).  The causes large amounts of electrical current to flow into the circuit and overloading it.  In this case, a properly working circuit-breaker will trip, stopping the dangerously high flow of electricity.

If you look in your Electrical Service Panel / Circuit Breaker Box, you will see breakers of different amperages.

It is appropriate construction practice to use smaller wiring for smaller electrical loads — protecting each circuit with a correctly size circuit-breaker.  As electrical load increases (perhaps to an electric cooking appliance — shown at the bottom of the box in the photo above) the size of the wire for that circuit increases.  That circuit is protected with a circuit-breaker(s) of a larger amperage.

The purpose of the circuit breaker is to stop the flow of electricity if the load becomes higher than the circuit was designed to safely carry.  If this does not happen, the wiring will fail, presenting a dangerous condition which can easily cause a fire.

When a short circuit or an overloaded circuit overloads a wire, the insulation on the wiring can begin to melt. This is due to far more electrical current flowing through the wire than it was designed to carry.

SUMMARY:  This article was written as a Public Service to warn homeowners of dangerous Federal Pacific Electrical Service Panels / Circuit Breaker Boxes which may be present in their home. Al’s Plumbing, Heating and A/C does not provide electrical service repairs or replacements.  Al’s provides maintenance, repair and replacement services for Plumbing and HVAC Systems.

Don’t trust your safety to someone who says a Federal Pacific Panel meets today’s electrical codes because it did at the time of its installation.  Federal Pacific fraudulently gained Underwriter’s Labs (UL) approval for these Panels.  UL approval was required in order to meet electrical code at the time these Electrical Service Panels were installed.  All of this is discussed in the video links within this article.

Call Al’s today to discuss any concerns or problems you have with your HVAC System or Plumbing.  We will arrange an appointment at your convenience and offer 24/7 Emergency Servic